The last few weeks have seen at least three major incidents of migrants[1] dying at sea—two off the coast of Italy, and one just off the coast of Alexandria, Egypt. These incidents have received much coverage in the media, but the framing of transnational migration in much of this coverage has been problematic. Questions of cause, responsibility and victimhood often focus on two main victims: the dead would-be migrants, and the “receiving” country. This not only assigns victimhood and denies agency to transnational migrants, but also ignores European (and specifically EU) policies that have severely limited migration from countries that they have historically played a role in under-developing. 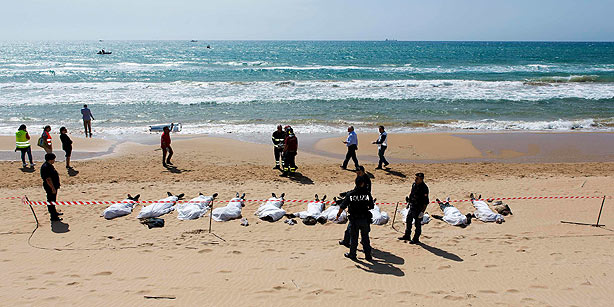 One narrative has positioned the EU and European states as victims of migration, and as helpless to do anything but deport or detain migrants in terrible conditions. An alternative narrative is one of benevolence on the part of European states: they are ‘saving’ people who are escaping terrible conditions in their home countries and therefore deserve a pat on the back. Flavia Dzodan writes about this, focusing on the politicized designation of migrants as refugees and asylum seekers:

“The EU needs these migrants to be exclusively denoted as ‘asylum seekers’ and ‘refugees’ because it can then place the responsibility for their displacement outside its borders. These people, we are told, are escaping conditions outside the realm of our responsibility. The structural poverty, political turmoil, warfare, etc, they face back home has nothing to do with us, or so goes the dominant narrative. In this narrative, the European Union then positions itself as “saving” these migrants by allowing them to stay (as the case might be with some) or alternatively, the European Union is saving us from their scourge by detaining them in inhumane conditions and eventually deporting them (as the case is with the vast majority).”

The political nature of this narrative is clear: it is a civilizational argument. A clear example of this is the Netherlands’ decision to grant asylum to all gay Iraqis—a move that can be labelled as ‘pinkwashing’. This second narrative, however, is being transplanted by the Europe-as-victim narrative as Europe begins to feel the dramatic effects of its economic crisis. Europe now simply ‘cannot afford’ to ‘save’ as many migrants and thus tends to position itself as a helpless victim of an onslaught of migration. What is clear is that both narratives rely on a view of Europe and the EU as detached from the structural poverty and conflicts in many of the countries migrants come from, as pointed out by Dzodan.

It is often assumed that it is “natural” or that it “makes sense” for people living in North Africa and the Middle East to want to migrate to Europe. This decontextualizes and dehistoricizes a global economic system that continues to privilege the centres of some countries at the expense of others. In other words, it is no coincidence that there are ‘developed’ and ‘developing’ countries—this is an inherent aspect of the global neoliberal system.[2] Locating Europe in the privileged zone and Syria, Eritrea and other countries from which would-be migrants are departing means acknowledging that there is a relation of power that often goes unacknowledged.[3]

Moreover, the role of numerous European countries in the occupation of Palestine, Afghanistan and Iraq, as well as numerous other conflicts—both through creating their material preconditions as well as being actively involved in the conflicts themselves—cannot be understated. These acknowledgments shift the status of the EU from victim/saviour to active participant, and articulate the ways in which the EU is responsible for much of what would-be migrants are leaving behind.

To control migration, the EU has adopted numerous policies, also often left out of media accounts. First, it has delegated specific receiving countries—usually Italy and Greece—to deal with incoming migrants, refugees and asylum seekers, and has increasingly made it difficult for these countries to send these groups to other (richer) EU nations. Second, the FRONTEX border agency has been established, which uses boats, helicopters and drones to monitor the seas and borders (although most borders have already been tightly shut, thus leaving the Mediterranean the only option for many). Around 25,000 people have drowned trying to reach Europe since 1990. The ones that do enter Europe are held in detention centres under terrible conditions or fined and deported. Others face tough economic circumstances and racism.

What is needed is a deeper analysis of transnational migration flows that goes beyond ‘unrest in poor countries’ and that focuses on power relations that characterize the global economic system. What about current structures that create these transnational flows, and how is the EU complicit in them? Questions of who is defined as a migrant are also important, particularly today when the term carries a lot of heavy baggage. Situating migration intersectionally is crucial: class, race, ethnicity, religion and sexuality all play a role in migration debates. Moreover, the heavily politicized and racial context of modern Europe cannot be ignored. Finally, it is vital that migrants not be seen as victims helplessly looking for European countries to save them. Rather their complex and difficult decisions should be contextualized and understood through their own narratives.

[1] It is imperative to note the baggage that comes with the term migrant and migration. Questions of who is classified as a migrant (and who as an expatriate worker), questions of types of migration, and questions of race, class, and so on are central to any analysis of transnational migration.

[2] This is clearly an over-simplification of what is a very complex system, where it is more useful to speak of a ‘Global North’ and ‘Global South,’ thus covering areas in the North which are marginalized, and areas in the South which are advantaged, particularly because of the policies of local elites.

Sara Salem is a PhD researcher at the Institute of Social Studies in the Netherlands. Her work focuses on historical and institutional perspectives on political economy, and centers specifically on the recent wave of uprisings across the Middle East and North Africa. Her interests include decolonial theory, third world feminism, critical political economy, and theories of post-development. She has lived in Zambia, Egypt, and the Netherlands, and is especially interested in Southern Africa and the Middle East, and formulating new forms of knowledges through decolonizing discourses that were naturalized through colonial processes. Blogs at Neo-colonialism and its Discontents Tweet her @saramsalem

One thought on “Framing Transnational Migration: An Intervention”