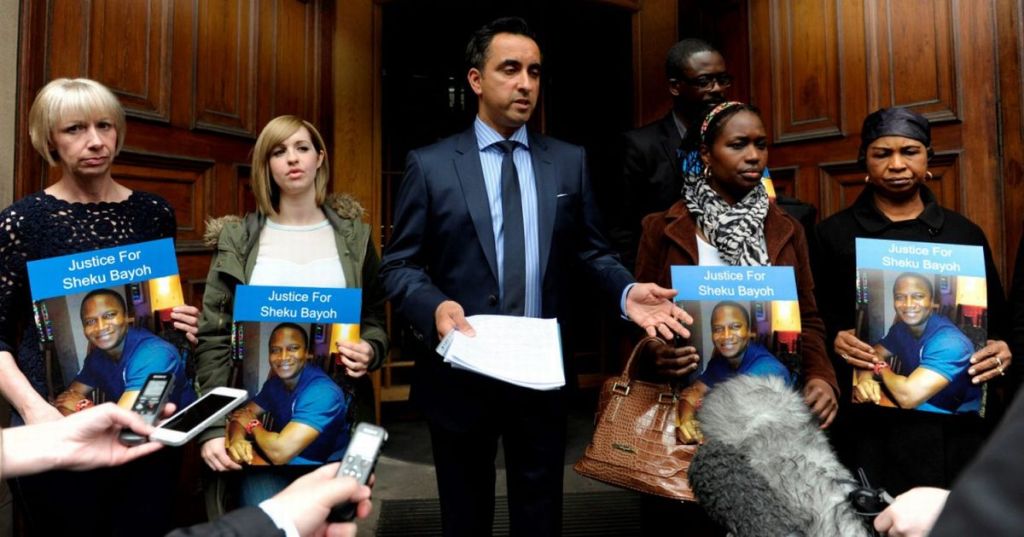 For those who missed Siana Bangura’s piece last week, 365 days ago Sheku Bayoh died in police custody. He was 31 years old. He leaves behind his partner, Colette, and two children, Isaac (4 months old) and Tyler (3 years old).

Why was it deemed necessary for 11 officers to detain one man? Unconfirmed rumours have abounded that Bayoh was carrying a knife, and that he died from asphyxiation. A lawyer acting for the Scottish Police Federation has stated that a “petite female officer” responded to a call of a man brandishing a knife, and was “subject to a violent and unprovoked attack by a large male.”

The case has been handed over to the PIRC (Police Investigations and Review Commissioner), who – despite pleas from Sheku Bayoh’s family – are yet to make any comment on the case.

This hasn’t prevented one of the few official responses manifesting in the form of the racist dog whistle, invoking the savage black man[1] terrorising a “petite woman”.

Despite 11 police officers being ostensibly needed to apprehend one man, and ending in this man’s death, not one of the officers have been suspended. In what profession could one execute their duties, resulting in their conduct being investigated, and yet still be permitted to work uninterrupted? And why did the PIRC only made arrangements to interview the officers in question this Wednesday – 31 days after the “incident”?

All that’s left is the void of silence. Sheku Bayoh’s loved ones are left to grieve without any form of possible closure. Are his children continuing to wonder where Daddy is? What response could their mother possibly give? 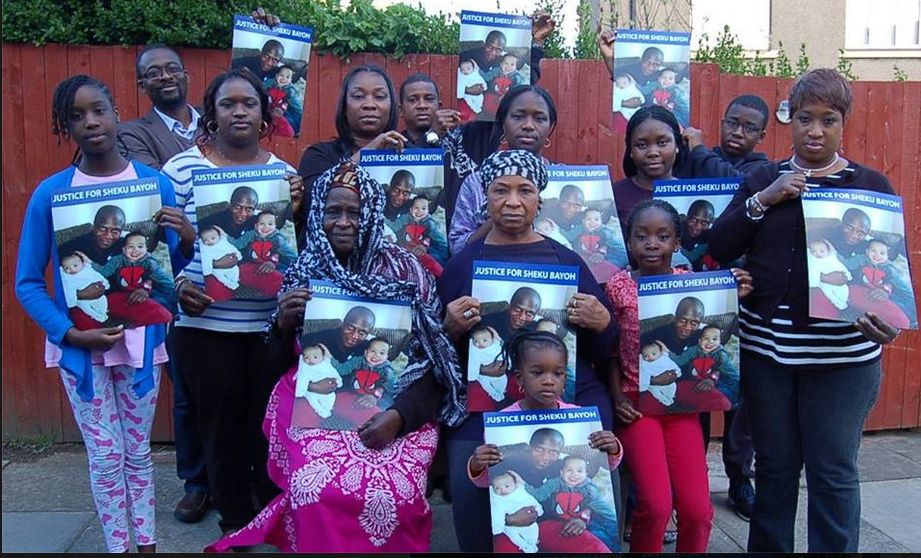 James Baldwin memorably said, “The law is meant to be my servant and not my master, still less my torturer and my murderer.” And yet, it’s to be expected that the PIRC’s investigation will ultimately find a way to exonerate the authorities from any accountability. It’s to be expected because it’s what happened to Olaseni Lewis. And Jimmy Mubenga. And Mark Duggan. And Joy Gardner. And Sean Rigg.

I hope against hope the same doesn’t occur in the violence visited upon Adrian McDonald and Julian Cole.

The lot of black people in regards to criminal justice is similar to the plight of Estragon and Vladimir in Samuel Beckett’s Waiting For Godot. We protest. We campaign. We use what limited influence our voices have. But mainly, we wait. And wait. And wait… for a justice that seldom arrives.

There are additional factors that must not be ignored. When police brutality against black people takes place, it often intersects with the issue of mental health. This functions as an easy way for an inquest to leverage blame onto the victim, revealing our society’s systemic ableism, as well as its racism.

In a country where mental health assistance is already underfunded, this is felt most acutely by its black citizens. Police have an easy excuse to be inhumane, as studies show black people are erroneously perceived to feel less pain than other races, leaving us in a particularly vulnerable position.

Also, far too often the focus on black lives is US-centric. Police brutality isn’t a uniquely American thing. Nor is it a preserve of Britain.

And what of our media? Why has this death – beyond a singular item in a few newspapers[2] – received minor press reportage? Is this systemic racism in action? A more subtle version of the Daily Mail telling one of their reporters not to cover the murders of a woman and her two children, as they were black?

Maybe so, but something else could be at play. It should never have needed it, but the death of Michael Brown, and the subsequent tireless activism from those in Ferguson (and beyond) started something.

While centred too much around cishetero (masculine-presenting) men, systemic racism in the police force is being taken as read to a greater degree in America, maybe more than it has ever been.

Can the UK afford for the same to happen here? The press can influence the national discourse, as well as reflect it. Are they honestly willing to play their part in starting a conversation about race on these shores? Or are the consequences potentially damaging to their own editorial agendas?

The tipping point will eventually come. But how many more have to die before it happens?

While those with the power to put this at the forefront of the national consciousness do nothing, the anguish of Sheku Bayoh’s family continues. These inquests often move at a glacial pace, with little regard for the well-being of the victim’s loved ones. How much longer must they wait?

And how much longer must we all wait not to be seen as a disposable nuisance by law enforcement? Will Bayoh’s sons grow up only to be depicted the way their father was (as Stacia L. Brown put it, “when a body is black and male, it is more weapon than welcome”)? Or will this death be our tipping point?

[2] – With the exception of some Scottish newspapers.

In the ongoing case of Sheku Bayoh, his family have started a petition to push Scottish police to provide answers and explanations around the circumstances of his death. You can sign it here.

2 thoughts on “#ShekuBayoh: 365 Days and Counting”