Take your mind back to just after the festive period when a tweet with screenshots of President Barack Obama and Prime Minister David Cameron’s twitter accounts was doing the rounds. It compared the reactions purportedly of US and UK Twitter after hired lackeys tweeted Christmas and New Year salutations from our elected overlords. 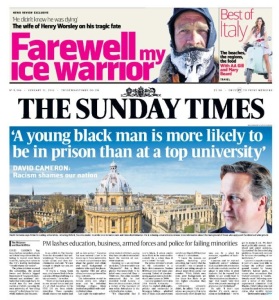 Whilst Obama’s mentions were filled with slightly festishy compliments, they were compliments no less. On the other hand the replies to Cameron were entirely expletive filled. I’m guessing from mostly people who don’t want to see him next Tuesday…

Today upon the release of The Sunday Time with article penned by Cameron inside, the critiques had somewhat more depth and both questioned and engaged in the history behind his statement that ‘A young black man is more likely to be in prison than at a top university.’ Before parsing that let’s consider the hypocrisy behind Cameron; PM and leader of the Conservative party saying it.

The hypocrisy of this man, whose lead a Government that's cut initiatives that helped BME communities 😤 https://t.co/nlFaEoK8TK

Then what he isn’t saying, because it just might implicate him, his government and their long and underreported war on BME communities (not to mention everyone else who isn’t expensively educated and rich):

And that bill you secretly passed that will stop Black kids from accessing maintenance grants isn't going to help. https://t.co/FLhKy5dhMI

His government have continually gutted and financially castrated all the public services that he is criticising.

It is under his government that legal aid has been slashed jeopardising access to quality legal representation for thousands of people.

It is under his government that university fees has tripled, maintenance grants been abolished and EMA stopped.

Which government set up kangaroo courts after the riots dishing out criminal convictions for looting bottled water?!?!

It's his government that has strangled local councils when providing mental health services, provision for young people and families.

What can we say but PREACH.

There's something about how this is framed, the repeated juxtaposition of black men & crime – also the either or – 'excel' or incarceration

But hold up? Criminality once again linked with black people by politicians? Weren’t we all just calling out Oliver Letwin…

..for doing the same in his post 1985 riot report to Margaret Thatcher that set back investment in black communities for decades?

leaves me ill at ease, makes me want to ask WHAT IS THIS HEADLINE DOING, WHAT IS IT FOR – from the point of view of the gvt it comes from

because this is not new news, and the solutions needed to change this are at odds with everything that government stands for

and there we have it…

David Lammy will head the review that The Sunday Times headline and Cameron’s statements today are linked to and if it yields positive benefits for black communities then praise Yeezy.

Very much welcome this review into race inequalities in criminal justice –@DavidLammy is a superb choice to lead it! https://t.co/7ICOGbVKZb

Writing in the Sunday Times, (which, let’s be honest, not many people from BME communities purchase) Cameron said discrimination should “shame our country and jolt us to action. I don’t care whether it’s overt, unconscious or institutional – we’ve got to stamp it out,“. All true, but we won’t be forgetting about your policies, disregard and contempt for BME people any time soon, Mr. Cameron.

You can find out more and support Bare Lit Festival 2016, giving authors and poets of colour the platform and visibility they deserve here