There’s a famous quote in Act 2 of Shakespeare’s tragedy Romeo and Juliet, when Juliet asks, ‘What’s in a name?’. The answer to that question is much more complicated than any of us could’ve ever imagined.

You’ll probably look at my name at the top of this article and wonder what I could be talking about. ‘Millie’ is such an inconsequential name. It’s rather English. Although my name isn’t short for anything, it’s traditionally short for Camilla, so it’s quintessentially British.

The truth is, I only became Millie less than a year ago. Before that, I had a Sikh Punjabi first name.

I knew from a young age that I hated my name. It stood against everything I wanted to be. You didn’t see all those popular, porcelain-skinned blonde girls in movies with names like mine. They had simple, pretty names like Stephanie, Hannah, Louisa…every name but mine. I could never find my name on stationery in souvenir shops. I hated my brown skin. I felt like it was the colour of mud. I thought that if I had white skin, I’d be popular like those girls with those English names. I thought all my problems would be solved if I could magically change my name and my skin. 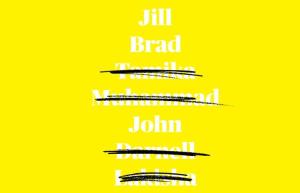 Those were the naïve thoughts of a child, of course. However, they never left me. I spent my teenage summers hiding away in the shade. My skin had lightened as I had grown up and it became my sole mission in life to stay as light as possible. I could finally pass for other ethnicities, even southern Mediterranean. It’s hard to believe it now, but I wanted to hide my Indian heritage as much as possible. There was just one thorn in my side: my name.

At sixth form and university, I went by the name Jaz. But ‘Jaz’ is common amongst the Sikh Punjabi community, and given the fact that I wasn’t obviously white and had some melanin in my skin, people would always ask me where I was from. I cowered away from the question, either diverting their attention or telling them to guess. I was deeply ashamed of where my roots lay. ‘Jaz’ was a giveaway. Even in my gentrified, upper-middle class university, someone knew someone called Jaz and they were Indian. My name was a betrayal.

This is what internalised racism does to you. It turns you into someone who hides their ethnicity like a dirty little secret. It convinces you to hide from the sun from fear of becoming dark, to change your appearance to look less like the stereotypes of your race. It means that not only do you sacrifice yourself as a woman for an ‘ideal body’, but you also go to painstaking lengths to try and look like those idolised white women portrayed in Western media, because women who look like you are only ever given the roles of maids or servants. Of course, diversity is now improving in the media, but during my formative years when it mattered most, I didn’t have a Mindy Kaling or Priyanka Chopra to look up to.

It’s not as bad as it used to be, but I still find that I distance myself from my heritage as much as I can. I try and look for as many differences between me and your traditional Indian woman. That’s why I changed my name.

My birth name never suited me. I was always too rebellious for such a traditional name. I was too strong for it. I felt like it was a ball and chain around my ankles, always holding me back because of the assumptions people made when they read it. I wasn’t that stereotypical Punjabi girl they saw when they read my name. I was bigger than that. I was bolder than that.

After my 22nd birthday, I officially changed my first name to Millie. I also gave myself a middle name because I could. It felt like I was free. It was as though I’d been cooped up in a cage my whole life and I was finally being allowed to spread my wings. I finally had a name that fit with what people saw. With my umpteen tattoos and piercings, bleached hair and tight clothes. Jasmeet, my birth name, was a complete contradiction of everything that I was as a person. Millie fitted my outward appearance and my personality.

Although the reason for changing my name stems from a place of self-hatred tinged with internalised racism, I am a lot happier now that I don’t cringe every time I have to introduce myself. It’s a weight off my shoulders. When people meet me for the first time and take in my elaborate and intriguing appearance, they no longer look bewildered when I tell them my name. Millie fits.

However, changing my name has also unveiled a wider world of racism that I didn’t think existed in the 21st century.

Until quite recently, I hadn’t had much success in the job market. Nowadays, more people are graduating from university, thus making the job market extremely competitive. Knowing this, I did copious amounts of voluntary work whilst at university in order to bulk up my CV and also to discover what I wanted to do as a career. It probably comes as no surprise that media is my chosen field.

I had always put my joblessness down to a highly competitive market; perhaps there were people applying for the same job as me, but they had done a gap year, thus making them better than me. But two years after university and with an extremely impressive CV that showed dedication, self-motivation and passion, nothing was happening. I’d been writing professionally for years and had plenty of the experience required to get a paid media job, even if it was just at an entry level.

Then I changed my name. ‘Jasmeet’ was banished from the top of my CV, replaced by ‘Millie’.

The interview offers could not stop flooding in. Every time I checked my emails, someone wanted to call me up for a phone interview or they wanted to meet me that very week for a formal interview. Every time I put the phone down, it would be ringing in a matter of seconds.

Nothing had changed. My CV had stayed the same. I still had the same amount of work experience, the same grades. In fact, I hadn’t actually changed my CV in a long time. The only thing that had changed was my name. ‘Jasmeet’ was the exact same person as ‘Millie’. They were both women. They had both graduated from a prestigious university at the same time and spent two years working and volunteering as much as possible. The only difference lay in a name.

Why was I suddenly inundated with interviews now that I was Millie? Jasmeet had been just as qualified and had worked just as hard.

The answer is simple: institutional racism still exists. Even though companies claim to champion the cause of diversity, it’s a lie. People of colour are severely underrepresented in most sectors. No one wanted to even give me a second thought when I was evidently Indian and brown. But when I became Millie, people were dying for me to sign their contracts on the dotted line. The ambiguity surrounding my surname meant that they expected someone white to turn up to the interview and, when I came in with my golden-brown skin, they couldn’t turn me away. Some of those who had asked me for an interview and assumed I was white were genuinely shocked when I turned out to be brown and spoke about how I write about misogyny in India. Some thought it was refreshing to see a woman of colour turn up and hold her own, as though I were on The Apprentice.

I changed my name for my own well-being and peace of mind. I never expected that it would have such severe consequences. It saddens me to think that thousands of other people of colour in the UK have had their CV and job applications shredded into a million pieces without the slightest bit of consideration just because of a name. People of colour have had to fight so many different forms of oppression just to be on the same footing as our white-skinned peers. Yet, if you scratch beneath the surface, we’re not on the same level as them. We’re still discriminated against. Companies don’t want diversity. They want a token person of colour who can be photographed here and there by the press; they don’t want a truly representative cohort of employees. The job market may want you, but it doesn’t want your culture and heritage. And if you outwardly display it by something as simple as a name, you’ll have to fight a war to prove that you’re not the racial stereotype they have in mind.

Millie Sansoye is a writer, feminist and linguist. Her writing specialises in sexism, race and mental health, having experienced how life can be impacted by all three. Although she is just starting her career, she is a familiar name in online print, having contributed throughout her education at the University of Exeter to many media outlets. She has several years’ experience in writing. Born and bred in London but of Indian heritage, her work often explores the conflict between her British and Asian identities whilst combatting the sexism within both communities. Her interests include studying feminism, learning languages and exploring the unknown in all walks of life. Blog: jsansoye.wordpress.com; Twitter: jazzykinks (private), MillieSansoye (public).

One thought on “What’s in a name? More than we can imagine”