In the final days of 2016 I’ve found myself resorting to the simple pleasures of children’s television. If the neo-fascists of Europe really do want me out of here, all they need to do is buy me a ticket to a place where scandal is the mysterious disappearance of an ice lolly on a summer’s day and Great British Bake Off winner Nadiya Hussein can read me bedtime stories. I’ll be gone tomorrow.

Indulging in this technicolour utopia has made me revisit my own childhood favourites. It’s only now I realise that Rugrats was less fantasy and more carefully observed documentary. The day I found half a cracker and a missing letter stashed in my son’s nappy, I wondered if I was underestimating his intelligence. The day he worked out how to unlock the child gate and scramble through confirmed that I had no idea of the scope of his scheming. 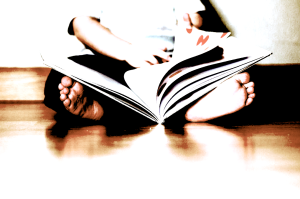 Once again I find myself in awe of this independent being I managed to create, and on some level I am convinced that toddlers are really manifestations of our best selves. As they waddle about trying not to tip over onto their disproportionately large heads, there is much that we adults can learn from them. If you’re paying attention, becoming a parent can make you a better person. Yes, you’ll become less self-centred, more patient, etc – but you’ll also get to witness firsthand the many ways that toddlers are winning at life.

While we remain hopeful that 2017 is a better year than 2016, things may get worse. Toddlers may hold the key to thriving in the shambles that could come. We’d do well to take notes, so here are some of mine.

Lesson 1: Being bloody minded has its benefits

While this kind of stubbornness exhausts parents and carers everywhere, it actually pays off for the tiny tyrant trying to bend the laws of physics or social etiquette to her will. As much as we try as adults to aid in children’s development, what we actually teach them can be relatively little. No one ever really teaches a child to walk; she works out how to do that herself after months of trial-and-error, a constantly bruised chin and many comedic tumbles.

Sheer bloody-mindedness eventually gets toddlers what they want. Adults will give in for the sake of their sanity, and somehow they will manage to make it across a room without face-planting into the carpet. We must remember that anything worth having is worth fighting for, whether it’s the last piece of avocado from your mum’s plate or the right to live in a world free of gendered oppression and racial hierarchy.

Lesson 2: Sometimes you need to cry

(It might seem unhelpful to compare my generation to toddlers as older generations seem to already do so with malicious glee, but bear with me.)

Toddlers fall and cry, then they run to you for hugs and kisses and comfort. As soon they’re suitably soothed, they’re back out there trying and tumbling all over again (see Lesson 1).

I’ve seen well-meaning comments about the way that ‘millennials’ are reacting to the political landscape. They generally seem to be in the vein of ‘suck it up’ or ‘we’ve survived worse’. But there is nothing wrong with mourning a world you thought you once knew. Fearing the future when all signifiers point to us regressing as a society is a logical reaction.

When we experience pain, crying is natural. So what’s wrong with expressing emotion?

Sometimes I think my generation’s biggest crime in the eyes of our detractors is that we express ourselves too much. We march when we’re angry, we tweet when we’re outraged, we speak our mind without permission. And sometimes we need to cry, and that’s alright, because we’ll be back out fighting tomorrow.

I count watching the Twirlywoos as a form of self care, and watching my son’s antics in a dazed slump as mindfulness. I am exhausted, yes, but I am also observing how ‘present’ he is in that moment. How does a child manage to spy the tiniest crumb of discarded toast on the floor and proceed to play with it? Why do they derive such joy from spinning around and around in a tight circle looking at their toes? The fact that they can get endless entertainment from climbing in and out of a toy box is lesson to us all.

When interviewing one of the participants of my Young Motherhood project, she told me a story about her son peeling off green paint from a park bench. She scolded him for destroying the bench but he replied, ‘No, mummy, I’m not spoiling it. I’m making a red bench!’, as he showed her the unspoiled paint that lay underneath.

Maybe it’s because they are so close to ground, but children can often provide a perspective many of us adults miss with all our hustle and striving. While thinking of the ‘big picture’ is very necessary, sometimes we also need to have the point of view that will allow us to look at the world around us with wonder and curiosity. That could be the difference between a green bench and a red one, lemons and lemonade, or the end of life as we know it and a bright new dawn.