Deciding that it is never too early to take the task of cultural reproduction seriously (see David Osa Amadasun’s article,

“‘Black people don’t go to galleries’ – The reproduction of taste and cultural values”), I took my fourteen month old son to the National Portrait Gallery one brisk November afternoon.

The exhibition that I had wanted to see was not yet open to the public, so we instead wandered around the permanent collection. At some point I released my restless child from his pushchair and let him waddle up and down the darkened corridors while visitors exchanged bemused looks and staff hovered over his inquisitive finger.

Watching my son toddle down the procession of white marble busts in the Statesmen’s Gallery felt surreal. When he eventually stopped to peer into a floor-to-ceiling portrait of King George V and family sitting stiffly in the shadowed grandeur of Buckingham Palace, I realised why my stomach was turning. While freely open to the general public, the National Portrait Gallery was not built for the likes of us. This impressive building was without a doubt funded by the blood of our ancestors, but we were never its intended audience. 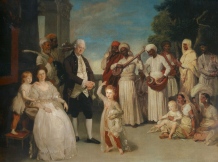 As a student portrait photographer, I often wandered the halls of the National Portrait Gallery making notes on lighting and composition, but in the years that had passed since, I forgot how white it all was. If your history lessons at school reflect the monochromatic displays in our National Galleries, you’d be forgiven for thinking that Great Britain was made “Great” by the simple virtues of visionary white men. But, wait! Actually, that’s exactly what our history lessons taught us. Black and brown faces were absent from everything, unless we were bound naked to the decks of slave ships or serving tea to genteel men during the era of “The British Raj”.

The dense tapestries of our histories have been reduced to our ancestors as child-like subjects of a benevolent empire that graciously civilised and educated them. When confronted with racist narratives many of us did not have a counter-narrative to guard our already fractured sense of self. At ten years old, I attempted to write my first novel. It was about a black girl from Birmingham who escapes her racist bullies and returns to Africa. There she discovers that she’s actually an African Princess, and, of course, it was imaginatively titled ‘The African Princess’. But I know I’m not the only one that told ambitious tales of being descended from imagined African kings to try and save face when bombarded with insults patterned after decades of poverty-porn charity drives.

During my conversation with Sharon Dodua Otoo we spoke briefly about how art is at the heart of nation-building. It is through art – literature, paintings, music – that the myths of nations are built and transmitted. The stories and ideas that are immortalised in libraries, galleries and the hallowed halls of “canon” are chosen deliberately. History is curated, censored, moulded and reformed. Then it is taught from textbooks, shaping the way that generations see themselves and interact with the world at large.

When the “bronze heads” of Ife were unearthed in south-western Nigeria in 1938, the beauty and skill displayed in these

sculptures challenged the narrative of the backward and culturally underdeveloped Africans that the British Empire had to save from themselves. So much so, Western ethnologists and archaeologists came to the conclusion that these heads were in fact the product of the fabled Greek city of Atlantis. The narrative of the superiority of Western culture was so precious that they were willing to bring a fictional city from the allegories of Plato to life, rather than believe that Africans were capable of such “high art”.

Eighty years later and as a culture we have not progressed so far as to leave the logic of white supremacy behind. When students at SOAS suggested that the philosophers they study actually reflect the fact that they are meant to be the School of Oriental and African Studies, of course the backlash was hysterical. Tabloid newspapers screamed that the “snowflake students” wanted to put a ban on “history’s greatest philosophers” and Twitter eggs suggested that this was somehow dumbing down the curriculum. The assumed superiority of whiteness rang loud and clear.

We’ve fought hard for representation, and we are seeing the fruits of that in the shape of films like the critically acclaimed ‘Moonlight’ and shows like Michaela Coel’s award-winning ‘Chewing Gum’. But we don’t just need media that reflects our contemporary lives and experiences, we need galleries, libraries and curricula that reflect our historical one. It is great that the amount of black and brown faces that our kids can relate to is growing, and I hope the numbers continue to rise. But we do them a great injustice if we allow them – intentionally or not – to believe that their cultural heritage and ethnic histories are too insignificant, unimportant, or unimpressive to be hallowed and revered like the old white men they will one day grow tired of reading about.

The Western world is built on the foundation of white supremacy – that is an undisputable fact. It is also an undisputable fact that we are out here reshaping and recolouring the future through our literature, filmmaking, art, and media. However, to truly break this old world apart we need to dismantle the centuries of half-truths and outright lies that allowed this house of cards to stand. Only then will we finally be able to retell history in absolute truth and technicolour glory.

One thought on “The unbearable whiteness of history”