Part 1 – Reimagining the Singularity of Media Representations of Black Fatherhood

Black fathers continue to be profiled in the media, and not just by the usual suspects. Why a broader perspective on representations of Black fatherhood remains largely outside of the public realm and what role visual storytelling could play to change that.

Black father absence is a contentiously debated social issue in the US and other countries. Too many Black men, so the argument goes, are missing, irresponsible, selfish, not stepping up to the plate. Visuals of deadbeat, absent Black fathers abound in mainstream media, often intended to sensationalize and ridicule rather than to raise awareness.

For example, consider this nugget of a “newsworthy” story – Orlando Shaw of Nashville, TN, father of 22 children by 14 women, sued for unpaid child support. This local blurb was featured in the week leading up to Father’s Day 2013, and went viral nationally in the US. A month later, there was even talk of the possibility of Mr. Shaw getting his own reality TV show.

Several complex factors contribute to Black father absence. While the statistics are daunting, the numbers too often lead to the simplistic interpretation that many Black fathers are absent deadbeats. Pundits across the political spectrum root this issue in a decline of morals, dissolution of family structures and a lack of personal responsibility. If we encouraged a return to “traditional family values” and promoted marriage, if Black men would “stop acting like boys” and “pull themselves up by their bootstraps”, so the recommendations claim, we could reverse the “epidemic” and make our communities vibrant again.

Anthony Francis and daughter Tena after falling asleep in front of the TV. Camp Lejeune, NC. 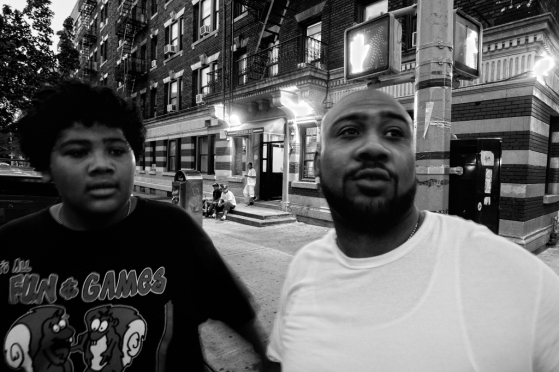 The realities are not that simple. The massive socioeconomic and political upheaval of recent years has especially impacted Black communities and families, with rising under- and unemployment, increased poverty, unprecedented income and wealth disparities contributing to declining marriage rates overall [i]. Society at large is transforming, as attitudes regarding the role and importance of marriage, family and parenting continue to diversify. And let’s not forget that Black males continue to be disproportionately impacted when it comes to racial profiling, lack of access to educational opportunities and meaningful employment, the deleterious effects of the “war on drugs” and the prison-industrial complex. Of course, these factors should never serve as an excuse for deadbeat dads, but this overall context is rarely taken into account when it comes to looking at the big picture of father absence [ii].

Another issue is that many social services programs narrowly define “absent” as non-married, non-cohabitating, and not formally paying child support. Studies show that individual circumstances are highly complex for many families, making the context of father “absence” and “presence” rather fluid: while many men undoubtedly deserve the “deadbeat” label, many others simply do not fit traditional provider roles. Often forced to define parenting in their own specific ways, these men strive to be present despite adverse circumstances: They may not live at home with their partner or kids, they may not be legally married to their kids’ mothers and they may struggle to provide on a consistent basis, but this does not automatically mean that they are “absent”. In fact, research suggests that among non-cohabitating, unmarried fathers, Black men are more engaged (and stay engaged longer) in their children’s parenting than men of other ethnic groups [iii].

Meanwhile, academia and pop culture have eagerly taken to the subject of what fatherhood means in the wake of ever-evolving notions of family structure and masculinity. There is a growing body of research on this topic, and popular sitcoms such as Two and a Half Men or Modern Family feature ordinary, far-from-perfect white males who certainly do not fit traditional patriarchal ideals. But when it comes to Black men, we haven’t seen an equally meaningful shift in their visual representation and the surrounding narrative.

The discussion regarding mainstream visual representation of Black fatherhood cannot be had without examining how Black men continue to be represented, which is mostly in the form of reductionist hypermasculine and patriarchal iconography. The continued fascination with, and commercial exploitation of, a narrow range of permissible Black male archetypes renders impossible any notion that Black men could be portrayed as wholesome, complex human beings, much less as responsible fathers. In addition, even critiques aimed at challenging deadbeat dad stereotypes tend to describe Black males in the context of a limiting racialized parenting experience: While legitimately calling out unemployment, systemic racism and discrimination as contributing forces at play, it is often implied that Black men are “damaged goods”, unable to be strong fathers to their “fragile families” [iv]. They are either victims of systemic oppression or in some cases complicit in their circumstances in that they have bought into a system of self-loathing expectations at the intersection of Black hypermasculinity and patriarchy. There is little room for Black men to transcend either narrative.

Things don’t necessarily look better on the other side of the spectrum. The days of Dr. Cliff Huxtable as America’s favorite über-patriarch are long gone, but this iconic father figure continues to cast a long shadow when it comes to representing the “antidote” to deadbeat Black fathers. In the absence of a well-rounded definition of what it actually means to be a “good” father (or perhaps, in the absence of public acknowledgement that a single definition cannot reasonably exist), there are certain recurrent father archetypes that persist in the media: The celebrity dad, the star athlete, the “traditional” cis-gendered, heterosexual, married, middle-class, co-habitating, custodial patriarch. These examples are often presented as larger-than-life success stories of overcoming personal hardship, but rarely put in the context of systemic racism, socioeconomic marginalization, and patriarchy. It is no wonder, then, that these fathers are eagerly co-opted as positive examples by pundits of “personal responsibility politics”, whereby taking into account any intersectional context of oppression seems overly complicated or irrelevant.

Jerell Willis and son Fidel watching the sun set on downtown Manhattan from the rooftop of their building. Lower East Side NYC, NY.

Guy Miller playing with his children on a Sunday afternoon. Bronx, NY. 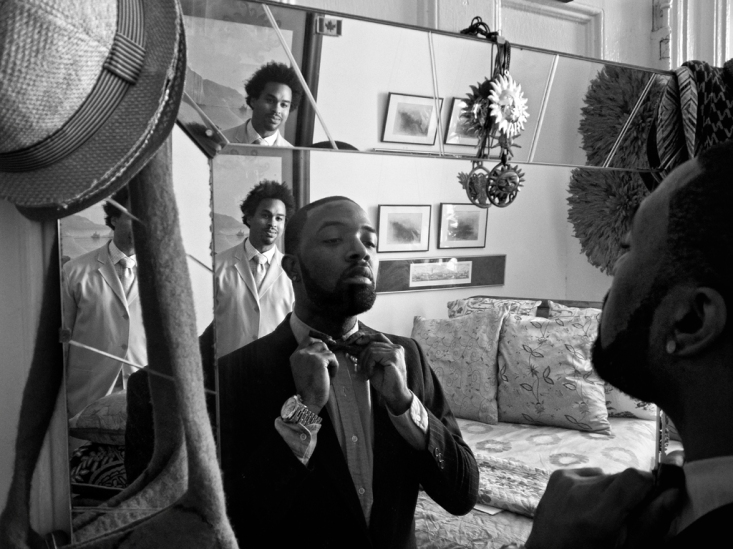 In other words, despite the fact that social, economic and political changes continue to inform more diversified notions of fatherhood for non-Black males, both “positive” and “negative” visuals pertaining to Black fathers remain stuck in paradigms that affirm rather than transcend limitations of patriarchy and hypermasculinity.

Lost in the shuffle of these visual caricatures: The story of the everyday Black father who doesn’t fit these preconceived notions. The Black dad who may be single, gay, non-cohabitating, non-biological, and yet committed to his parenting responsibilities. Even as many Black men are exploring and reframing alternate notions of masculinity for themselves, society still cannot acknowledge them as affectionate, in touch with his emotions, or vulnerable sui generis. Any discussion around these qualities occurs in well-trodden masculinity/femininity dyads or from a perspective of deficiency: These fathers are generally perceived as less-than-perfect role models compared to the traditional patriarch. The question remains, why do these examples of fatherhood remain so invisible when it comes to Black men?

Read PART 2: Fathering While Black Part 2 – On a Path of Forgiveness

Zun Lee is a physician and visual storyteller in Toronto, Canada and member of Aletheia Photos. He was born and raised in Germany and has also lived in Atlanta, Philadelphia and Chicago. Zun focuses his photographic work primarily on social and human rights issues in communities that are often overlooked. His aesthetic aims to uncover unseen aspects of identity and connection.

This article was commissioned for our academic experimental space for long form writing curated by Yasmin Gunaratnam. A space for provocative and engaging writing from any academic discipline.

One thought on “Fathering While Black”