Black historians in the UK: the unseen scholars

BBC Radio 4’s Making History programme recently considered the plight of black historians, taking six minutes to explore the question of whether black historians exist in the UK. A number of white historians gave their perspectives on the issue but the views of black academics like Professor Hakim Adi from the University of Chichester and Dr Olivette Otele from Bath Spa University were also taken in to consideration. Prior to the programme there was a lot of circulation via social media (I personally received about 5 emails) trying to encourage black historians to come out of the woodwork and make contact with the producer to let him know that we existed. I sent an email with the work that I have done over the last fourteen years through my social enterprise Every Generation Media; from talks, workshops, articles, publishing websites such as 100 Great Black Britons, books When We Ruled, Caribbean in Sepia and Masters of the Airwaves. I got an email back reassuring me that I was a black historian!!! 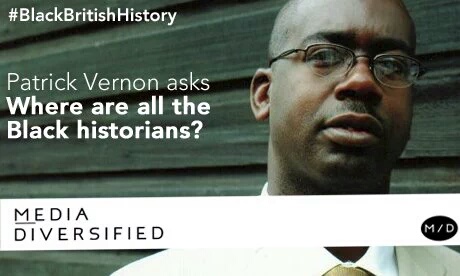 Hakim Adi, who is the only black professor of history in the UK, also contacted the producer to be on the programme and to highlight the conference that he and others organised in April 2015 called History Matters, which focuses on the lack of black historians in higher education. However it appears he had to make the case to be on the programme which is quite ironic regarding his standing and track record. This further highlights the invisibility of black historians as a result of structural racism in the media and higher education system which has been documented by The Runnymede Trust and also interestingly by David Cameron in a recent Sunday Times interview.

The Radio 4 Making History programme had a golden opportunity to explore the factors and barriers preventing us from seeing more black historians. It could have examined the wider debate on the national curriculum and the various campaigns such as Why is My Curriculum White? or Rhodes Must Fall. There are a whole host of initiatives working to expose the legacy of Empire and enslavement that sees our heritages and historical experiences relegated as footnotes in the national narrative. I personally experienced this myself when I raised the issue around the celebration of the Black Country Day Flag in the West Midlands and the failure to acknowledge the relationship of the chain making industry and how it enslaved Africans in America, Caribbean and Africa on slave ships and plantations whilst the wealth fuelled the ‘Industrial Revolution’. I was vilified, trolled and victimised by local politicians, local and social media for raising this issue. In fact, I was advised that I should learn the history of the brave men who made the chains in the foundries in the Black Country who were exploited by the owners!

Although there is a scarcity of black historians in the formal academic world here in the UK, there is also a growing body of self-taught and trained historians working informally. These communities include academics that cannot get tenure at universities and centres of learning, although many have had to relocate to mainland Europe, the Caribbean or the USA. Again this would have made interesting fodder for the discussion on Radio 4.

We are part of a wider tradition which has its roots in Africa, Caribbean and in African American communities in post slavery/colonial and Jim Crow societies as organic/public intellectuals in using the black historical experience in fighting for racial inequality and social justice. Paul Gilroy, in his book The Black Atlantic, describes this tradition from the time of Olaudah Equiano. The works of Harold Cruse (The Crisis of the Negro Intellectual: A Historical Analysis of the Failure of Black Leadership), Manning Marable (Dispatches from the Ebony Tower: Intellectuals Confront the African American Experience), bell hooks and Cornel West (Breaking Bread: Insurgent Black Intellectual Life) all explore the roles, challenges and expectations of black intellectuals and their relationship with the black community and mainstream scholarship. This tradition values and perspectives not based on Eurocentric thinking around objectivism and empiricism but instead rooted in black experiences of racism and colonisation in challenging stereotypes of beauty, history, civilisation, art, and scientific racism.

In the USA, since the 1960s with the implementation of affirmative action policies as part of the civil rights movement, we’ve seen growth in black history studies courses, departments and professorships at universities, whilst in post-independence African and Caribbean countries the process of nation building and economic development has led to the creation of universities and scholarship programmes. The impact over the last 60 years has led to a number of black historians at an international level along with other academics across other disciplines in getting the recognition through publishing and the media as part of globalisation of education and public intellectual thinking. However, with the exception of Paul Gilroy and the late Stuart Hall, as black historians in the UK we are invisible at this international stage.

Even here in the UK our voices are not called upon for interviews to give our perspective on historical television programmes, news features or comment pieces. Those black academics that have tenure at universities (only a handful) also have their own challenges in securing permanent jobs and platforms to share their research. Mainstream universities and the BBC employ but a few who have managed to achieve acknowledgment, including Hakim Adi, Olivette Otele, Dr Caroline Bressey, Dr Gemma Romain, Dr Kehinde Andrews, David Olusoga and Kurt Barling.

Although in the UK we have not had the kind of impetus and recognition seen in the USA, there has been change over the last few decades with the rise of the Black Power Movement, trade unionism, socialist activism, supplementary school movement, black feminism, the arts movement, self-help organisations, and Pan African and Afrocentric political organisations, along with the expansion of black media and publishing outlets. These movements have created the environment for an independent black scholars network. Again the BBC Making History programme failed to explore this network of scholars. They could have interviewed the likes of S.I. Martin, Arthur Torrington (Windrush Foundation), Robin Walker, Dr Lez Henry, Nubian Jak, Esther Stanford-Xosei, Charmaine Simpson and Mark Simpson (Black History Studies), Cecil Gutzmore, Tony Warner (Black History Walks), Toyin Agbetu (Ligali), Kwaku (BTWSC/ African Histories Revisited), Dr Angelina Osborne, Dr Michael Millian, Onyeka Nubia, Andrew Muhammed, Michael Ohajuru, Selina Carty (Black Poppy Rose), Leon Robinson (Positive Steps), and many others. Nevertheless, this cadre of historians over the last several years is starting to receive recognition within and outside black communities. A number of these individuals including myself are respected for our knowledge and historical insight. We all straddle both worlds in not only writing and researching history but also adding a social context by using all forms of media from websites, blogs and articles in newspapers to workshops, walks, curating exhibitions, publishing books and filmmaking. These scholars are also part of a wider movement of activism on black liberation which foregrounds diversity of thought and analysis.

An important milestone which has supported these changes has been the introduction of Black History Month in 1987, which allowed central, local government and community organisations to fund and sponsor black heritage activities and programmes, along with renaming of council buildings halls, estates and roads. With the introduction of the Greater London Authority and creation of Mayor of London, Ken Livingstone from 2000 to 2008 with support from Lee Jasper and a range of a number of advisers and activists further influenced the funding and promotion of black history and the role of black scholars in a variety of programmes and events. A high point was the creation of the Mayor’s African and Asian Heritage Commission in 2005, which played an important role in influencing the Arts Council, the Heritage Lottery Fund and the major national heritage organisations to do more work on Asian and black history by recruiting and funding more black scholars, writers, academics and equitable partnership working with BAME led heritage organisations. However, since Boris Johnson took over the Mayoralty in 2008 and with the introduction of austerity and cuts in public and voluntary sector by the Coalition government in 2010 and now the Conservative government, the funding for black history has been dramatically cut. In addition, there is even an annual debate on the merits and future of Black History Month!

Black historians’ activism over the decades has also influenced universities and funding bodies thinking of diasporic communities and the black British experience and its relationship with Empire; however, in 2016 the majority of research in universities on these topics is led by white scholars. Although there is a growing pool of black postgraduates, many are now becoming by default members of independent networks of scholars as they are excluded from the gates of academia. These networks of talented individuals are working on the margins without due recognition or resources. Sadly, if they were based in America, the Caribbean or Africa they would be professors or senior leaders.

To address the issue of under representation of black historians we need an affirmative action programme similar to that in the USA to increase the number of black historians at universities. There must also be more flexibility in Heritage Lottery Funding, Arts Council and research bodies to support and encourage independent black scholars and historians who are providing a public service in the education and learning of young people within black communities, but outside them as well.

Patrick Vernon OBE is a leading expert on African and Caribbean genealogy in the UK. Founder of Every Generation Media and 100 Great Black Britons Patrick was selected by the Queen as Pioneer of the Nation for Cultural History in 2003. He has researched family history and Swahili culture in East Africa and Oman as a Clore Fellow and has advised the BBC, The National Archives, The National Trust, Royal Geographic Society, Victoria & Albert Museum and the British Council. In 2012 he was awarded an OBE for his work tackling health inequalities for ethnic minority communities in Britain. Having worked for the Department of Health, NHS and the voluntary sector Patrick is an Associate Fellow at the Department of the History of Medicine at Warwick University, England. See his website www.patrickvernon.org.uk or find him on Twitter @ppvernon

One thought on “Where are all the Black historians?”