Warning: the following post contains images that readers may find graphic or disturbing.

Last week, FGM campaigner Hibo Wardere broke the news that Sky had filmed the mutilation of a little girl in Somalia and intended to broadcast the footage in the UK. FGM campaigners who had seen the footage were in agreement — the footage was distressing, a violation of the little girl’s rights and broadcasting rules. Sky News has delayed the broadcast since the uproar. Many were shocked at Sky News’s audacity but this readiness to show violence on black bodies and black girls in particular is not new.

FGM, now rightly framed as child abuse and as sexual abuse (by some), has become a crowd-pulling commodity and the little black girl has unwillingly become the face of British FGM campaigns run by charities and police, artistic endeavours in galleries, theatre and books. The subject has become trendy, an award-winner for artists, creative agencies and charities — sensitive representation be damned: FGM, you say? Must be amazing, courageous, necessary. No matter how many times the award-chasers claim FGM is not just a Black problem, the images and stories resolutely remain that of the black girl.

So, just how are these little black girls represented visually? Let’s start with theatre — a world I know a little about. Here, the image is that of the black girl and/or woman (specifically Somali), often fragmented, focusing on the face with facial features either removed (Cuttin’ It, Young Vic/Royal Court) or stitched up in a collage of different faces (Little Stitches, Arcola Theatre, 2014).

The images are essentially ‘cut’ — a reference to FGM, as though activist theatre gives license to further cut/abuse, fragment a victim. This cutting of the face of the black girl in particular is a foul dehumanisation and commodification in the name of theatre’s activism and will offend and push away communities that have traditionally practised FGM. But do they matter? Is any of this for them anyway?

The Met Police and the NSPCC also engage in this fragmentation, as seen in this NSPCC poster decapitating a black girl. All of the NSPCC posters I have come across are exclusively of the black girl. 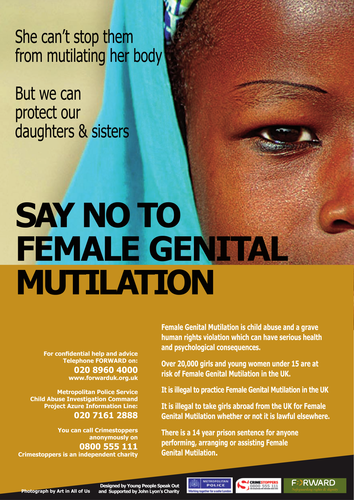 Besides photographs of black girls, visual images of FGM in the UK revolve around stick female figures and symbols. If the only FGM-related photographs the British public see are of black girls, then any non-photographic representations of FGM will invariably be associated with little black girls. So what do these images look like?

Beyond the stick figures lie the more symbolic representations, often using the rose or another flower to represent the vagina, with thread or scissors never far off. Why do we need to see this dehumanisation of the body? Why this need to show the act of violence itself on a child? ‘Clever’ campaigns run for charities like Amnesty and 28 Too Many race to win awards for this sort of commodification. Ogilvy’s FGM advertisements for 28 Too Many depicting blood-stained flags cut and sewn back together attracted some criticism but went on to win the Cannes Lion, the most prestigious global advertising award.

The most disturbing images are created by who I refer to as armchair campaigners, dehumanising and commodifying the little black girl with abandon.

No other campaigns in the UK highlighting harm to children depict the actual harm or the tools used to cause harm to the child. FGM, however, has its own rules. A call for everyone to make a difference (which has had results) has led to its representation as a cut-up black girl, often inaccurately shown as an adult despite the fact that the victims of FGM are children, her vagina symbolically on display with all its wounds, its instruments of torture poised, in action, and always the red of the blood, dripping, pooling, splattering. There is a distinct tone of ‘othering’ that allows for the representations of FGM in this way. The need for awareness does not justify or require this gross injustice, this level of dehumanisation of the black girl. Enough. Just stop.

Firdos Ali is a UK-based playwright who writes about the Black, British, Muslim experience. Her works include Struggle, Stripped Black and How I Feel. She is currently on commission, working on her latest play. She mostly (re)tweets from @Firdoswrites.

4 thoughts on “FGM as spectacle: the dehumanisation and commodification of the black girl”